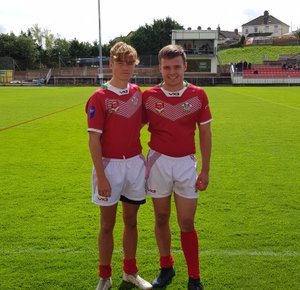 Iwan Stacey (#11) and Lucas Elliot (#4- Pictured on the left) from Elmbridge Eagles Achieved Wales Under 16s International Honours V England Under 16s in 2019.

Lucas offers an insight into the experiences;

‘I went from playing at Old Cranleighans rugby club against local (ish) rivals Invictor Panthers , to playing against  England in Llanelli, in 2019- all in the space of a month.

It was an absolute honour and dream come true, so much so that I could hardly believe it when I heard my name on the loudspeakers. It was an at times painful, rewarding and overwhelming road to putting on the Welsh jersey, but despite all the obstacles and challenges between me and the number 4 shirt , I honestly enjoyed every second of it. The significant step up was humbling and motivating and  in parts probably too much to handle in one go; but since I attempted my first ’play the ball ’ the Elmbridge coaches I’ve had have drummed in a dogged determination that carried me through. The opportunity to play for your country in any sport has to be the pinnacle for any sports player and the help the club have given me and others in achieving - won’t be forgotten.

The game didn’t go to plan score-wise with England, but frankly that didn’t matter – this is a rare occasion when the ability to take part in the game was the real reward. I’m proud that I held my own against a bigger, more skilful team full of scholarship boys from Professional clubs across the country at the highest level. We ,as a welsh team, competed throughout the game. I’m by no means the biggest or the most skilful internationally capped player there has ever been, but skills learnt, practiced and refined in the Elmbridge colours meant that didn’t matter. A definite highlight of my life already, any player at the club who doesn’t think they’re capable of achieving the ‘wild fantasies’ they have in the game need only to look to me as an example that, if you’re committed and serious about your dream in the sport, those ‘wild fantasies’ of 13 on 13, chasing an egg for 6 tackles on the international stage is a realistic target.